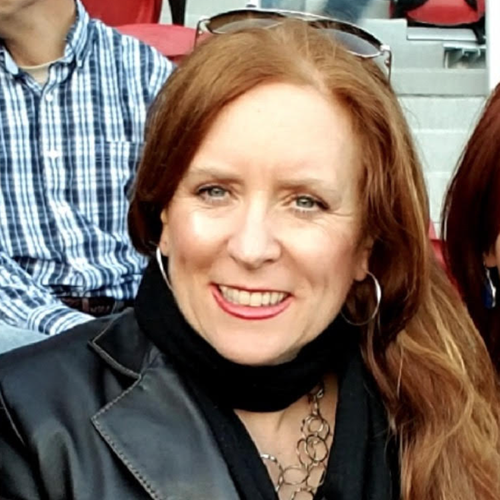 Born and raised in San Francisco, Anne and her family were a part of many Irish organizations growing up: United Irish Societies, Connaught Club, Ulster Social Club and the United irish Cultural Center. Anne’s parents, originally born in Cavan and Sligo, met in Woodside, New York in a local dance hall. In 1967, they drove across Route 66 and settled in San Francisco.

Anne began a career in retail in 1989 while attending SF State University. Graduating from college, Anne pursued retail management. While working at Macy’s she met her husband Ed Carew, 5th generation San Franciscan. After raising two children, Anne went into education and found her calling: working with high school students. It was during this time that Anne pursued her Master’s degree in Counseling Psychology at the University of San Francisco and followed her father’s footsteps by getting involved with the United Irish Cultural Center. While on the board for four years (2006-2010), she led a brick fundraising campaign and created the sister 501c3 non profit.

Anne is going into her 10th year of counseling high school students and mentoring counseling interns. In addition, she has also been a guest lecturer at San Francisco State University and Skyline and instructor at University of San Francisco and Children Empowerment Inc. non profit. As chair of her counseling department, she is part of multiple leadership committees within her school and district.

Anne rejoined the United Irish Cultural Center board in 2017 and is in her 2nd year as President. She writes a monthly article in the Irish Herald, the oldest Irish newspaper on the West Coast, founded in 1962. The UICC has endured many changes in the last 20 months. At the end of 2018 the UICC shut down the old business structure making way for a new business plan and in 2019, the UICC officially became a 501c3 with a community and cultural programming focus.

Anne commends her board for being creative and starting three new businesses and a fundraising appeal. A call has gone out to carry on an additional plan of cultivating SF Irish history and for The Center to expand its role of the seanachaí (storyteller) within the community. The UICC is looking for donations of artifacts, memorabilia, photographs and/or stories and plans to expand the library.