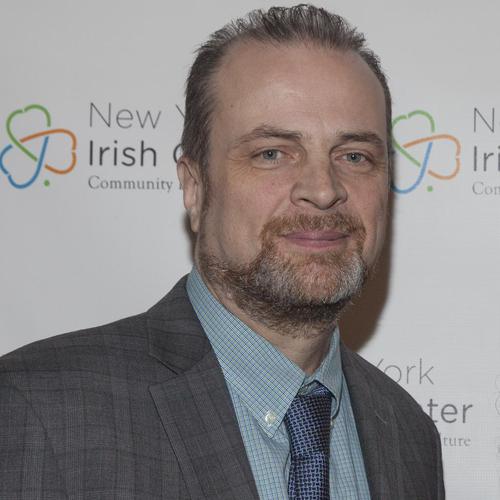 Paul Finnegan has been the Executive Director of the New York Irish Center (NYIC), a vibrant community center based in LIC, Queens, since 2009. During this period he has given expression to NYIC’s mission, drawing on just three words for its direction: Community, Culture, Care. To that end, in partnership with a dedicated and committed Board, he has overseen great development in NYIC’s infrastructure and programs.

The NYIC’s ethos is rooted in the Irish immigrant experience of New York City, particularly in the recent waves of immigration from Ireland since the 1980s. Its mission can be summed up simply as “Community Is Our Culture”, and its social and arts offerings are all provided in an Irish cultural context. This includes public events (Irish music concerts, plays, movies, seminars and talks), along with classes in music and language for all ages, where native Irish and those of Irish descent can gather. And since Irish culture is attractive to many beyond the Irish, the NYIC attracts a very diverse audience to many of its events. And of course, a traditional Irish céad míle fáilte is extended to all.

NYIC has developed increasingly progressive programs in recent years, with its Story Continues networking series, geared for the LGBTQ community, and its celebrations of mixed-race Irish, which is timely again as the United States continues to struggle with its historic issue of racial justice. NYIC also maintains a strategic partnership with Solace House, a provider of mental health services.

The NYIC is very attentive to its senior community with some of its Irish immigrant members reaching 85 years and above, providing various weekly programs to gather and socialize including a lunch each Wednesday and weekend activities. It is the NYIC’s way of ‘giving back’. NYIC has pivoted to provide much of its offerings on line with COVID-19 but maintains a physical link to its seniors by delivering lunches to their doorstep.

NYIC has also played a key role, in collaboration with four other New York Irish organizations, for Slainte2020.org – a platform which has delivered a half-million dollars in community donations to those in desperate financial straits following the abrupt shutdown of the New York City economy in March.

This is the second time Paul has been the chief executive of a not-for-profit in New York’s Irish community, having served as the Executive Director at Emerald Isle Immigration Center (EIIC) for several years in the mid 1990s. During that time he also formed the Coalition of Irish Immigration Centers (CIIC), a national umbrella group, and convened its first national gatherings in Washington DC in 1996, and Boston in 1997.

In between, he worked for over a decade in information systems in the U.S. foodservice industry, primarily in Internet branding and marketing, along with B2B software implementations across an industry-wide platform of supply-chain partners and customers.

Paul was raised in Galway City, Ireland, where he received an undergraduate degree in Mechanical Engineering from U.C.G. (now NUI Galway) in 1986. He also received a Master’s of Science in Business Computer Information Systems from Baruch College (C.U.N.Y.) in Manhattan in 1997, where he has also taught as a part-time adjunct professor in their CIS Department.

He lives in Glendale, Queens, with his wife Rosa, native of the Dominican Republic, and their two children, Kevin (20) and Sara (15). Both of his brothers, Sean and Paraic (Patrick), also live in the U.S., while his sister Maureen lives in Ireland. His father, John, was a professor in the Civil Engineering Dept of NUI Galway for many decades prior to his retirement and recently passed away in the family home in Renmore, Galway, at the great age of 90. Paul’s mother, Máire, passed in 2010, RIP.